September 18, 2020
It's Friday, my friends. If you are reading this, please know I'm proud of you. The fact that you were able to trudge through the unknown (or maybe the too well known?) of another week is something to celebrate. I tend to live in my own head and can often forget to expand myself out to the bigger picture. Steps forward are still steps, no matter the pace. The amalgam of everything we are is far more incredible and long-lasting than any time you misstepped or misspoke. And if this week was terrible, the worst week of your life, I am truly sorry. I am thinking of you and sending you love. I am holding for you the earnest belief that you will survive far beyond anything that you are being faced with now. While the week may be at an end, we have the power to treat it as a beginning if we so choose. One of the small beauties of life.
Per a typical Friday, I woke up to Spotify alerting me of a whole slew of new albums and singles released at midnight (Alicia Keys' new album "ALICIA" is currently holding my top spot of the day.) Artists of all kinds tend to release their work on Fridays - I'm sure there is a algorithmic reason for this, but I prefer to speculate. Fridays are seen as a day of freedom, particularly for those in the nine-to-five crowd like myself. We're planning our weekends, we're unwinding, we're trying to breathe a little easier in anticipation of some time for ourselves. It can be helpful to take the week to prepare, refine, or just muster up some courage. I often choose to post on a Friday and all of the previous reasons as to why are not untrue. But I think more than being the reasons themselves, they are the air pushing my sails of reason. They are what make days like today feel open for vulnerability and newness, and that is what creation is. Even if it is a rewrite of the same song you've sang one thousand times or starting from scratch on a drawing you've worked on for ages. A reworked recipe, a redecorated home, a new route in your drive home. Creating in our lives allows us new beginnings. It does not matter who sees your creation. It does not matter if you are a professional or a novice. Making something out of nothing changes the world as we know it. We add a new lens to our view, a new pattern of color to our kaleidoscope. Seeing new parts of ourselves can be scary, can be invigorating, but it always pushes us further. It always shows us a little more of what we're made of.

Almost nine months ago to the day, I woke up to the posthumous release Mac Miller's last studio album "Circles". His music had not been on my radar for a while, but I remembered being in college and listening to some of his early mixtapes. In my first semester I had befriended two dudes who lives down the hall named Nate and Jack. I use "dudes" very deliberately. They were good hearted and friendly, though unlike me in every way; their lives pretty much revolved around HALO, Jack Daniels, and various Soundcloud-esque rappers. They welcomed me into their little unit, with my combat boots and black fingernails and complete ignorance towards pretty much anything they were talking about. They would put on Mac Miller and we would spend evenings shit talking and watching movies (Nate's favorite, ironically enough, was "Friday".) The music still holds memories of being young and unabadeshly goofy in an unfamiliar world. Though I didn't keep up with his music, I knew that Mac Miller battled demons and that they'd show up often in his music. His short but monumentous life was spent making music to help people enjoy themselves through connection. His lyrics spoke of winning the war against himself, no matter how many mental battles were lost along the way. I was deeply sadnedded to learn of his passing in 2018. Twenty six is far too young for any person to die. My heart breaks for any person who falls victim to their struggles with mental illness or substance abuse. I have lost many of my own similar battles and, in my darkest times, feel that I may just not win my own war. To know these moments exist for others is a deeply personal, frightening, humbling understanding.

I listened to the album start to finish. I replayed the song "Good News" over and over and wept. I was not this man's biggest fan, or even more than a casual listener. But this song hit me deeply, permeating in my heart and bones. It is a calm, steady-paced, conversational anthem for those who, like him, felt the world weighed too much to carry most of the time. Days of waking up deep in your own head, trying to smoke to calm the nerves. Thinking too hard, followed by moments of clarity, then overwhelming doubt, to retreat for a while and lay back down. It felt like I was listening to words from my own journal. The hardest parts to listen to are the most optimistic - again, this album was released after his passing. He sang "there's a whole lot more for me waiting on the other side" and my heart panged with true sorrow. The sadness, the irony, was palpable. To be hurting but hopeful, unaware of what could or would happen in a life for which you felt ill-prepared. I am in this place often. It made me want to give anything to just hold my hands out to this person, born the same year as me, and tell him that life right now is not life forever. Being a person is shitty and hard but it really can be worth it, even when we don't believe it. The song tells the story of someone who knows deep down that they must keep pushing. If you haven't yet, I recommend a listen.

As sad as I felt for Mac Miller, I also felt grateful to have stumbled upon this album. I felt intimately thankful to hear the music of someone like me; the creations of someone who seemed to experience as much self-doubt, depression, and uncertainty as me. No matter how unworthy we feel, the universe (or whatever you'd like to attribute) is asking us to show up. Just as we are, to give what we can. New beginnings are created in ways we hardly ever expect, and I believe they will inevitably bring things into our lives that we could not imagine otherwise. I decided that day, indebted to this song, that I was worthy enough to heed the call. So I grabbed the camera I'd bought myself for Christmas but was too nervous to use. I piled together things I found in the house - some sheets, an old tapestry, a sound-activated disco ball - and I took a shot at some self portraits.The photos here were taken to appear as vulnerable as I felt. I am just a person who took some pictures in a closet, but in the moment it felt like everything. Without this album, without this day, Hazy Heat as I know it might not exist. It is all owed to people who have the courage to create from themselves, just as they are.
__________________________________________________________________________________ 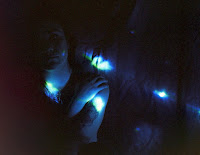 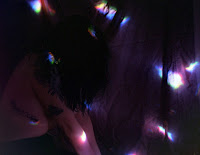 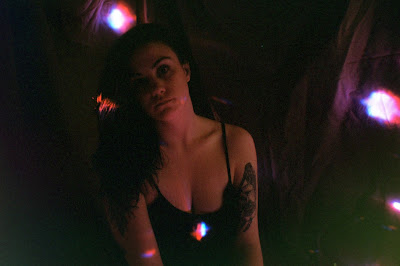